The college I went to had these absolutely delicious peanut butter bars. Every single time they were offered as a dessert, I HAD to get one…or two (…or three). Not sure if it was the peanut butter bottom or the chocolate top but I was hooked. After I graduated college, I was devastated that I had to leave these delicious bars behind.

That is, until a few days ago when I decided to see if I could find the recipe online. Low and behold these bars are not as elusive as I thought they’d be – it was the first recipe after googling “peanut butter bars.” They looked easy enough, so I decided to make them as my first non-box-mix attempt.

The first problem I ran into was when I was purchasing my ingredients. I had no idea what confectioners’ sugar was or how it was different from normal sugar. Luckily I quickly learned from a roommate that confectioners’ sugar is another name for powdered sugar. Why not just say powdered sugar in the recipe? Life would be so much easier if ingredients only had one name. 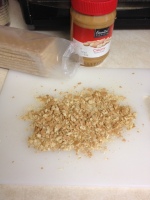 Then I had the brilliant idea of putting the graham crackers in the bag they came in and breaking them up with my hands (see picture on the right). Not only was this way not messy but it was faster than using the spatula. See, this is what they should tell you in recipes – kind of like the Half-Blood Prince notes (but seriously, how did Harry not know that was Snape’s handwriting?)

You may be thinking to yourself, there’s no way you could have a problem with the rest of the recipe. That is where you would be wrong my friend. This recipe calls for melting the chocolate in the microwave or in a metal bowl over simmering water. Didn’t have a microwave, since a former roommate took hers when she moved out, and didn’t own a metal bowl. So I did what any normal person would do – I just heated the chocolate on low heat and hoped it would turn out correctly. Which it did!

After placing these bars in the fridge for the allotted time, I tried one. I must say they passed the taste test. They tasted exactly like the ones at my college. I would recommend keeping them in the fridge if you aren’t serving them right away, since they taste better when cold. Room temperature makes them softer and melty.

If you’re looking for a simple delicious recipe, look no further. Peanut butter bars are the way to go.